After having my cochlear implant for 15 years, I have learnt to know when my sound has changed in the slighest ways, so when I woke up yesterday and found when I put it on, it sounded funny in a sort of fuzzy way. TV or Radio or sounds such as the kettle or every day things sounded fine but voices sounded sorta echoey... I had a mini freak out because I'm going to Bournemouth next week and I wanted my implant to be just right. I was like "why now??" I changed my batteries to see if it made a difference but it didnt, so I waiting til my mum came home and she tested things out with me such as her voice.
It was not clear as it should be, kinda echeoy, fuzzy voice like she was talking through a walkie talkie. I changed the coil but that was no different. I gave it to mum and she started flicking switches!!! I was like "what the hell are you doing??" because I'm kinda protective of my cochlear implant! But then she said "try that..."
and it sounded fine again... I was'nt sure what she did then she said "I put it on the M switch at the bottom of the 3G esprit processor" but I could have sworn I never touched them because I have never really used the W or T switch so by now it had been so long since I tested them out that I had forgotten what they meant! Mum checked the websites to see what they meant and apparently, I must have accidently flipped it to the Whisper switch! When it should be on M.
Suddently I felt so relieved! if not a bit silly for having a freak out! hehe
I would like to take a moment to mention Micheal Jackson who's music I grew up with, with the cochlaer implant from the age of 9. I remember I used to be scared of the Thriller video and hide behind my dad! My favourite song was Smooth Criminal but I guess all Micheal songs were legendary! He may have been troubled later on in life but his music was brilliant. RIP
Posted by Www.lozsmedicsljourney.blogspot.co.uk at 12:42 pm 1 comment:

What a busy afternoon I had! Volunteering at the school was busy but fun! This week is Sports Week so theres lots of sports acitvities to keep the kids busy! The weather has been absolutly gorgeous thankfully and I've been outside watching on the grass, all the kids do their sports acitivies and cheering them on! Today was good fun too because there was a huggeeee portable climbling wall in the playground ( with safety helmets and harneses of course!) and circus things to play with such as juggling balls, spinning wheels and stilts! I had a go at the juggling, as rubbish as I was and helped the kids with the spinning wheels and the stilts! 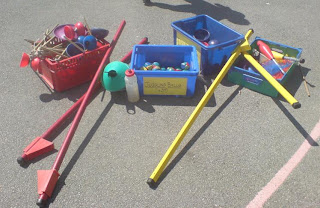 Because it was soooo sunny, my eyes were almost closed due to the brightness! I'm a bit blind when the sun is that bright and I cant see where I am going...

Also today, a kid in the class I was helping in went "BOO!" in my cochlear implanted ear right in the microphone! Just above all the class room hustle and bustle, I heard him and turned and he went "scared ya" hehe :) bless him! If he had done it in the unimplanted ear, i'd never have heard him!

So this afternoon of fun. frolics and sun, I am so tired! The sun really make my eyes hurt at times when I'm out in open sunshine a long time which I think is because my eyes are so small and the fact they are droopy and not letting much in so when I'm out in bright sunshine, it really hits me and my eyes automatically try and close because it's so bright! Apart from the sore eyes, I had a good afternoon and I intend to have a goooood sleep in! Zzzz....

Do you know on a morning when you first switch on? If it sounds any slightly different do you panic?? I do! I have done this quite a few times when I scare myself! haha I switch on and the volume is switched down what with me fiddling with it putting it in it's dry box the previous night... then I scare mysefl because I think something is wrong with my processor or mapping! then I take a few mins and reaslise that it's just turned down! Phew! haha I guess I get a fright because of what happened to the other one.

On another note I had a good day at the school where I volunteer. It was nice just sitting on the grass hearing all the kids cheering on their teammates in a race!

Posted by Www.lozsmedicsljourney.blogspot.co.uk at 4:05 pm 2 comments:

I love my dad! He's put up a lot with me what with meidical things but he drives me to the hospitals and places I want to go. My parents are even taking me down to see Gwyn for a week. im a very lucky person to have two fabulous parents! :0)

This pic was taken at my uncles birthday. it was a while ago hence the short hair but I love the pic! 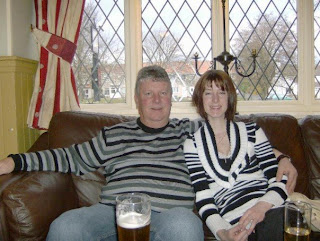 Posted by Www.lozsmedicsljourney.blogspot.co.uk at 11:35 am No comments:

On Saturday evening, I went to along to a friend's birthday party who was my friend's brother in law. When I got there, they were playing 5 a side football at Soccer City. I got myself a drink which was mostly water rather than cola... lol so i asked them for another which was better!
It started off good and having a chat with the people I knew there but once the disco started... all conversation went out the window! All i could hear from the room was boom boom boom music and everyone looked like they were miming as I could not hear their voices! I switched my cochlear implant off a couple of times which was very pleasing. There were also a few young kids running around screaming at the top of their voices! but thats kids for you! Kevin told me he thought the disco was too loud too! we both had such a headache by the time we got out of the room and went down stairs to watch some of the kids that were at the party play football. Lets just say I am glad i have my implant haha because I can switch off whenever I want! :) Kevin and other people were jealous of this! I have another birthday to go to this Saturday as well which is a meal so that will be good and a bit more peaceful! It's been a very busy two weeks with volunteering and birthdays! ahhhh sleep!
Posted by Www.lozsmedicsljourney.blogspot.co.uk at 7:16 pm No comments:

Lately, I have been reconsidering the eyelid lift procedure because
I have emailed the docs about it after more information about the procedure since last time I was there, I pretty much gave the doc a blunt "no" Since then the top of my eyes are feeling strange and heavy, I would really rather not feel like this any more. Today at volunteering I could hardly focus on the board and the teacher so i barely knew what the lesson was about!  Although i did email the doc, I got an automatic email saying he was on holiday til 15th june. Typical! 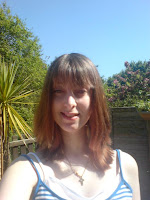 On a more happier note, I have been enjoying the sunshine in the garden soaking up the rays and the park with my boyfriend which was a lovely weekend.  It's been a while since we had some decent warm weather! I tend to make the most of it! I'm also doing my cross stitch which I'm glued to at the moment! It will be good to get it finished!
Posted by Www.lozsmedicsljourney.blogspot.co.uk at 10:28 pm 3 comments: