i just wanted to wish everyone a Merry christmas! i hope everyone has a lovely time!
i was hoping to go to my friends house tonight but full of cold and my ear infection is back  in right non cochlear ear :(
anyway everyone have a lovely xmas!
Posted by Www.lozsmedicsljourney.blogspot.co.uk at 5:21 pm No comments:

i had trouble closing my eye at first so i was worried if i would sleep! but i acutally got the best sleep id had in ages! it also helped getting up at 5am the previous day! 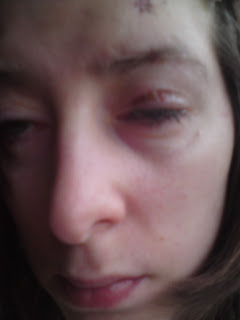 i woke up to a sore eye again so i took some more paracetamol this morning. it hurts to blink wholey with all of the eyelid because the eyebrow is sore too. but paracetamol is helping! I was talking with my mum this morning and she told me that my eye surgeon had seen more of me as a brow suspension patient than any other because normally he just does one adjustment.  WIth me hes done both brow suspensions on both eyeiids and adjustments on both too. it made me think how bad must my eyes have been and how weak my eyelids must have been. it upset me a little.
on the right- a pic of my eye as it is at the moment.
Posted by Www.lozsmedicsljourney.blogspot.co.uk at 12:19 pm No comments: 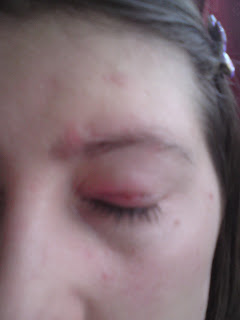 Yesterday was ONE LONG DAY! we had to get up at 5am to drive to newcastle for 8:30am. I didnt particulary have a good nights sleep the night before even though i want to bed around 9pm ( which is rare for me!!) so its no surprise i got up feeling totally shattered and not feeling the best! I didnt have any breakfast since i thought i would be sick in the car! but i had my feed through the night so I was ok to miss breakfast. It was bloody freezing in the car too being 5am!
I made it to newcastle without being sick woo! We waited about half hour for the doc to see us. I still had a horrible looking sore scar on my eyelid from when he operated the brow suspension, he told us that it would be fine and doesnt need anything doing to it and it will heal on its own .I was also told i would be going to theatre at half 10 as he had moved us up the list because an adjustment doesnt take that long and we had to drive back home. 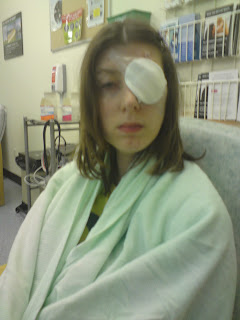 Me and dad went down to theatre with me to hold my hand (mum never comes to theatre with me coz shes scared of needles ha!)  i must admit ive gotten used to locals after having them stabbed in my eyellid and in my head! it kills but not for long! i didnt expect anything from this as it was just an adjustment but i was a little worried as my scar on the eyelid hadnt healed and was still sore. I was right! it did hurt a bit but it was nothing compared to when he did the left eye brow suspension!! At least they were kind about my concerns about my cochlear implant in theatre. Some docs n nurses are not so friendly about that and just want to get on with the job which annoys me.
I was a bit concerned when he put a patch on my eye because i didnt have one on my right eye the last time! but he said he was happy with how it went and i was to take my patch off after 2 hrs or so. i left it til i got home from newcastle.
The patch was to apply pressure and keep the eyelid shut to avoid bruising. I had some paracetamol as soon as i got home because i was in some pain.
Posted by Www.lozsmedicsljourney.blogspot.co.uk at 12:08 pm No comments: