We traveled to middlesbrough before going to newcastle to drop in on my nana and wish my aunty a happy 50th bday! and see my counins and 2nd cuz baby evie she gets cuter every time i see her!

After saying goodbye to my nana we traveled to newcastle and stopped over at premier inn to be there early the next day.  We got there at 10am to see the eye doc Patrick and the plastic surgeon to discuss what they would be doing basically the plan was to get rid as  much as possible of the brow suspenson as possible as it was causing constant cysts on my eyelid and get rid of the cyst that was already there.

we then had  had a brief update on how i was doing mito wise with Victoria Nesbitt she was happy with my progress so far. 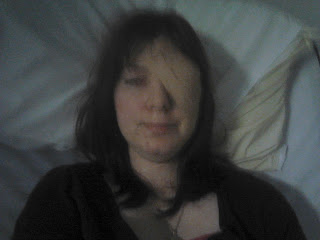 Then come 4pm it was time for the operation and dad came down with me to hold my hand as i hate having needles done  and my mum is terried of them! It's always the first needle that stings then its completely painless!

if the skin hasnt made enough new skin they will give me a skin graft but hoping not!

At least the padding is painless!
Posted by Www.lozsmedicsljourney.blogspot.co.uk at 7:13 pm No comments: