Sometimes I feel like friends are dfifting away from me, I mean I talk to some of them on MSN and things like that ocassionally but some i havent talked to for a while. I know they can't help being busy and getting on with their lives and jobs and it takes a few weeks or months to organize a get together.
I spend a lot of time on my own at home and only mostly get out only for appointmetns to hospital or things like that. i try and keep myslef busy at home doing crafts or things like that, I've even taken up pen=paling just so i can get ou of the house to post the letter! Something to movitvate me to walk the 10 mins there and 10 mins back from the post box. Mum said that's all l need just to excercise my legs and keep them moving. it seems when I walk on my own, I walk FASTER I walk slow there but then I start up walking faster on the way back because my heart is pumping a bit too much due to the lack of energy in my body and i get a bit breathless by the time i reach back home! It's like the faster I walk, the faster i get there and have a break. But it's all good! Keeps my mind busy too! Having too much time on your hands can make you go a bit crazy to say the least!
and in other stories, I saw the finished result picture of my friend's eyelid op, now the bruising and swelling has gone, it looks quite good. I'm looking forward to the finished result of mine although not to the actual operations!! The first is all orgnaised at the moment so hopefully things will go alriight!!
Posted by Www.lozsmedicsljourney.blogspot.co.uk at 1:15 am No comments:

Yesterday, I was woken early by mum (yes I get woken by MUM alarm!) I have had vibrating alarms in the past and I always switched them off! However, I DID get a fire alarm vibrating alarm for my bed which would defo wake me which I hope never goes off because it means theres theres a FIRE! Anyway, I was woken by mum because it was PEG change day, it hurt a bit more coming out today even though it wasn't a studen nurse, it hurt because around the PEG site was sore. It does that occasionally and needs some kinda steriod cream on the skin around it. It didn't hurt that much though and it was quick.

After I recovered from that, parents asked if I wanted to go toYorkshire Sculpture park and get out of the house for a bit. I was a bit grumbly because I was tired, but i went anyway and saw some awesome style sculptures which were all spread out over a few acres of land, It was just about warm to go round for a walk and take some pics. I moaned a bit with all the walking we did becuase it was a longggg walk for my little weak legs to cope. Mum did offer to get a wheel chair from reception but stubborn me said "no, I'll be ok". SO today my legs are sore when I walk about. Anyway, I've learnt my lesson. If its gonna be al long day out, dont refuse a wheelchair! We have a trip to London coming up soon, so parents hired a wheelchair for those long days out. Beats me moaning that I'm geting tired and want to go back to the hotel and ruin my parents day out? 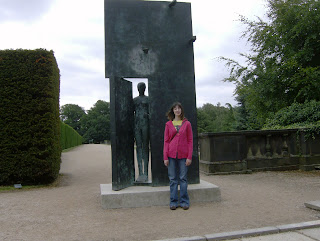 Posted by Www.lozsmedicsljourney.blogspot.co.uk at 12:43 pm No comments:

Fears for my Cochlear implant....

Don't get me wrong. I'm proud to be a cochlear implant wearer and would even say it's a part of me now but despite this and BEACAUSE of this, I just cannot go out in public with my Cochlear implant on show. I'm always scared that someone will pinch it, i know it's stupid but I love my cochlear implant too much too lose it and I can't do without it. I wear it 24/7 *apart from bed and bath* as any of my friends nad family know. I was quite confident wearing it when I was a teenager at college but I had an icident in my town where when I was wearing a baseball hat and this awful girl came from behind and nicked my hat right from my head and went over to her mates and played with it on her head showing off. As she snatched my hat from my head, my Cochlear implant nearly went wth it as i had my hair in a pony tail. I had the confidence to go ask for it back but my confidence was a bit shaken when I nearly lost the cochlear implant so ever since I've worn my hair down when I'm out and about in town. Might I was with my 2nd implant too. I've always been scared of losing the outer part of the cochlear implant. If i did, i would be in such a panic!!! Id be so lost without it even for one day! It would be nice to be able to show off my cochlear implant whenever I was out and about and show how proud I am to wear it and I hope i can sometime in the future. This cochlear implant has changed my life for the better and I really don't know where I'd be without it. One thing is for sure though, my life would so very different if my parents never implanted me in1994 when i was just 9.
I also rememeber the fear when my CI surgeon told me I'd lost the first one. I wondered how I'd cope without it and a million things rushed through my head as he was talking. Even If it was only a month til i was reimplanted in the other ear, i think what helped me was having my friends at school coz I was only 15 and i was grateful the school had a deaf base too so I had extra help. It has given me fears about losing my 2nd one though, although I know it's unlikely because I now have my PEG and I'm getting my vitamins and nutrients, so if i EVER got another ear infection, hopefully i'd be able to fight it off. I know I only lost the first one because I coucldnt fight off the infection because of my undiagnosed conditon but I should be able to now thanks to the PEG and the feeds I'm having and now that docs know about my mitochondrial conditon.
I know I am proud to be a CI wearer and I hope I'll eventually get over hte fear of not being able to wear it in public places one day
Posted by Www.lozsmedicsljourney.blogspot.co.uk at 1:52 am No comments:

I have finally made my choice about the eyelid operation! I am going for it! I may as well do it if it's going to be done sooner or later! The person who I was emailing about helped a lot and helepd me to make my choice. I'm still scared about the local but I've been through tougher things than a little prick on my forehead!!! SO I've given in to the docs as well. I know it will be good for me in the long run and help to look and see better. As you know, there's stil a 6 week wait and we only called on Monday and we haven't heard from the eye doc Mr Griffins yet so I assume he will send us a letter and let us know what day he will want us up in August sometime. I am prepared for everything that will happen, such as the local and the swelling and pain (which shouldnt be too bad! well i hope not anyway since i have to do this TWICE!) I will post pics although not too gruesome when I have had it done. I really couldn't find ANYTHING to do with brow lift suspensions I am going to have on google. So hopefully people will know what a brow lift suspension actually does when I post pics! I have only ever found eyebrow lifts or brow lits on google but nothing like my eyelid lift ie the brow lift suspension. So I was happy to talk to someone who did but I'm kinda glad I didn't find anything on google.There probably would have been things about it that put me off!! Anyway It will all be worthwhile in the end!
Posted by Www.lozsmedicsljourney.blogspot.co.uk at 12:31 am No comments: